The SPFL vote to end the lower league season early and distribute the remaining balance of monies has fallen into farce after another afternoon of blame and counter blame in Scottish football.

Ten of the 12 top flight clubs voted to go along with the proposals, with only Rangers and Hearts voting no.

In the Championship, Partick Thistle and ICT were the only clubs to vote no, and across the third and fourth tiers, where 15 votes were required, a total of 16 clubs backed the decision to end the season with immediate effect.  Three voted against with one more club still undecided.

However it is the Dundee vote that would swing the decision one way or another.

Scot Gardiner, ICT Chief Executive claimed on BBC Sportsound this afternoon, that he had seen the signed voting slip from Dundee which rejected the proposals.

But the SPFL have said they have not received Dundee’s vote which leaves the fate of the season in the balance. 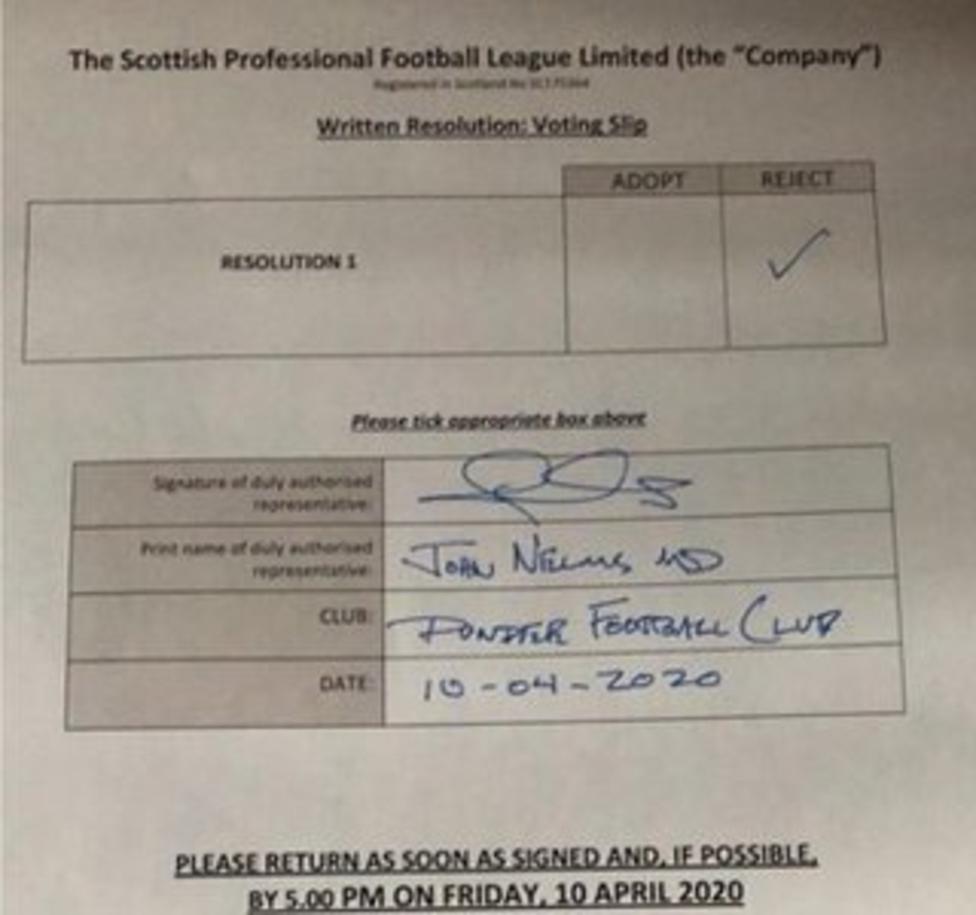 Rangers have subsequently issued a statement calling for an independent investigation of the SPFL’s handling of the members ballot – and the suspension of Chief Executive, Neil Doncaster and legal adviser Rod McKenzie.

The club claim they have been given evidence that raises “serious concerns” over the league body’s voting process.

Rangers say Doncaster tried to “silence” their attempts to discuss these grievances.

“Rangers will not be bullied into silence,” the club’s statement said.

“The voting debacle and the evidence we possess raise serious questions concerning the corporate governance of the SPFL.”

Rangers’ interim chairman Douglas Park said: “The lack of leadership and responsibility from the SPFL as a members’ organisation has shocked me. Crucial decisions are being made on the issues of promotion and relegation behind closed doors and without proper time for consideration or debate.

“As a member club, we are disturbed by the evidence that has been presented and feel there is no choice but to call for an independent investigation into this entire matter.

“All we ask for is equality and respect. In the past few days, we have become alarmed at a seeming lack of even-handedness and fair play from the SPFL. This is surely unacceptable and, if substantiated, must be remedied.

“Other member clubs, who have seen the evidence we hold, share our concerns. We call for the suspension of the SPFL’s chief executive Neil Doncaster and its legal adviser Rod McKenzie while an independent investigation is conducted.”

In responding the claims the SPFL Chairman Murdoch MacLennan said: “It is extremely concerning that Rangers have chosen to make a number of very serious allegations against the SPFL, its corporate governance, its culture, its office-bearers and its business operations.

“In the often-heated atmosphere of Scottish football, rumour and misinformation can very quickly reach fever-point.  However, allegations of a lack of even-handedness and fair play go to the very integrity of the league and I would expect Rangers Interim Chairman Douglas Park to present compelling evidence to back up his claims, or to withdraw them.

“I anticipate that the SPFL Board will convene early next week to discuss a wide variety of issues and I will be writing to Mr Park asking him to urgently communicate any and all information he possesses in order that teh board can take whatever steps are necessary.”