The SPFL this afternoon have extended the period of postponement for Scottish Premiership fixtures to give the best possible opportunity for the remaining 2019/20 fixtures to be played.

The move comes following a further meeting with SPFL clubs this afternoon, which included the resolution to recommend the termination of the SPFL season for the SPFL Championship, League 1 and League 2 competitions.

SPFL clubs are to vote on the resolution on the termination of those leagues, with the final season placings determined by points per game in league matches played to date by each club.

It also means that if the SPFL Board determines that the remaining Premiership matches cannot be played, the Premiership would also be terminated, with final season placings determined on the same basis.

The SPFL has circulated a written resolution to its 42 Member Clus recommedning that the SPFL clubs approve:

If the Premiership is decided on Points per Game, this is how it would look: 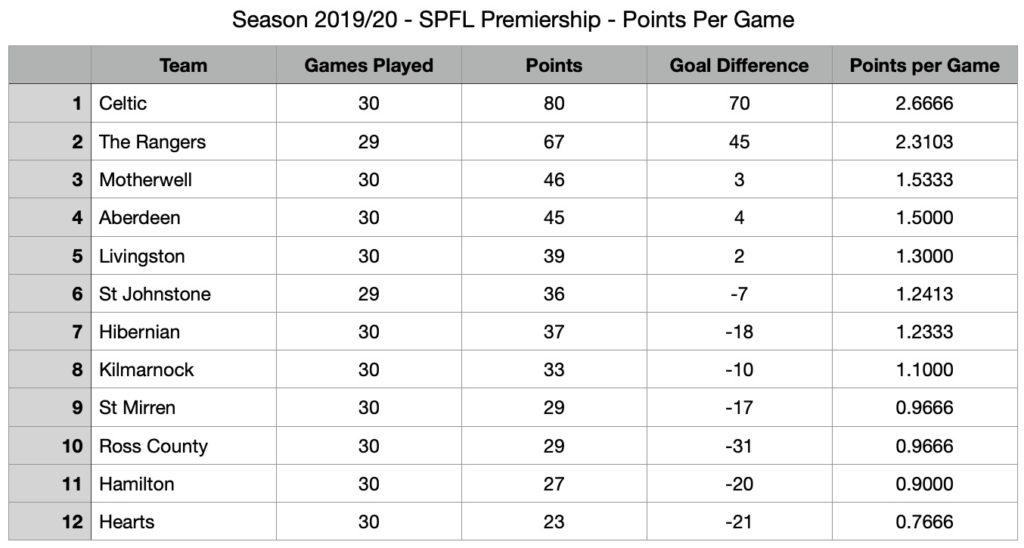 If approved, this would result in the promotion of Dundee Utd, Raith Rovers and Cove Rangers, and the relegation of Partick Thistle and Stranraer.

If the Clubs approve the resolution, the SPFL has also committed to consulting with Clubs over the possibility of League restructuring ahead of the 2020/21 season.

For the resolution to pass, nine Premiership Clubs, eight Championship, and 15 in Leagues One and Two need to vote in favour of the proposal, with Friday (10 April 2020) at 5pm the deadline.

No decision on the fate of the Scottish Premiership will be taken until after UEFA’s executive meeting on 23 April 2020.

The proposals have already been derided by Rangers, Hearts and Partick Thistle.

SPFL Chairman Murdoch MacLennan said: “These are extraordinarily difficult times for our entire country and, like every sports body worldwide, we have been wrestling with the enormous challenges caused by the outbreak.

“To their credit, every single club in the SPFL has been committed to completing the remaining fixtures for Season 2019/20, but they also all recognise we must prioritise the safety of players, officials and fans, and ensure our emergency services are given every possible assistance to focus on their vital work. Many football people have friends or family who are working with the emergency and health services or who have been affected by this awful virus and I have been struck by the strong sense of solidarity shown by everyone in our sport.

“The communication from the Scottish Government at least gives us a degree of clarity, meaning it will now be impossible to fulfil the remaining fixtures in the Ladbrokes Championship, League 1 and League 2 without causing huge financial damage and uncertainty for Clubs in those Divisions. We have recommended a way forward which we firmly believe enables the best possible outcome for Scottish football in these very demanding and unique circumstances.”

SPFL Chief Executive Neil Doncaster added: “As a Board, we have consulted extensively with clubs in all four divisions since football was suspended on 13th March and have taken expert legal and commercial advice.

“Now is the right time to act. Very regrettably, we must face the reality that it’s simply not possible for the remaining Ladbrokes Championship, League 1 and League 2 fixtures to remain postponed without causing significant further financial harm to clubs in those divisions.  Further, many of our clubs are experiencing very challenging organisational and financial circumstances.

“Everyone in our game and in the country generally, is wrestling with the devastating impact of Covid-19. They all know there are no easy answers or simple solutions, but the Board’s recommended proposal will give us a far greater degree of certainty, minimise the harm to the game overall, and enable us make end-of-season fee payments now to Ladbrokes Championship, League 1 and League 2 clubs.

“The position for the Ladbrokes Premiership remains particularly complicated. Everyone is aware of UEFA’s desire for the family of European football to work together to resolve the issues that confront us all. We are keen to work with UEFA and remain in discussion with them over the situation in Scotland.

“The quicker we reach a final position the better, but there is no doubt this is the most complicated and challenging situation our game has faced in living memory.”