The SPFL have announced that the 2019/2020 Scottish Premiership season is now over and Celtic have been crowned champions, with Hearts relegated from the league with eight games remaining to be played.

Aberdeen have finished fourth in the league, one point behind Motherwell – both teams have secured UEFA Europa League places.

The decision comes following a meeting of top-flight clubs this afternoon after agreement was made that the remaining fixtures will unlikely be played this season.

The league has been decided on a points-per-game basis as follows with no play-off competitions being cancelled: 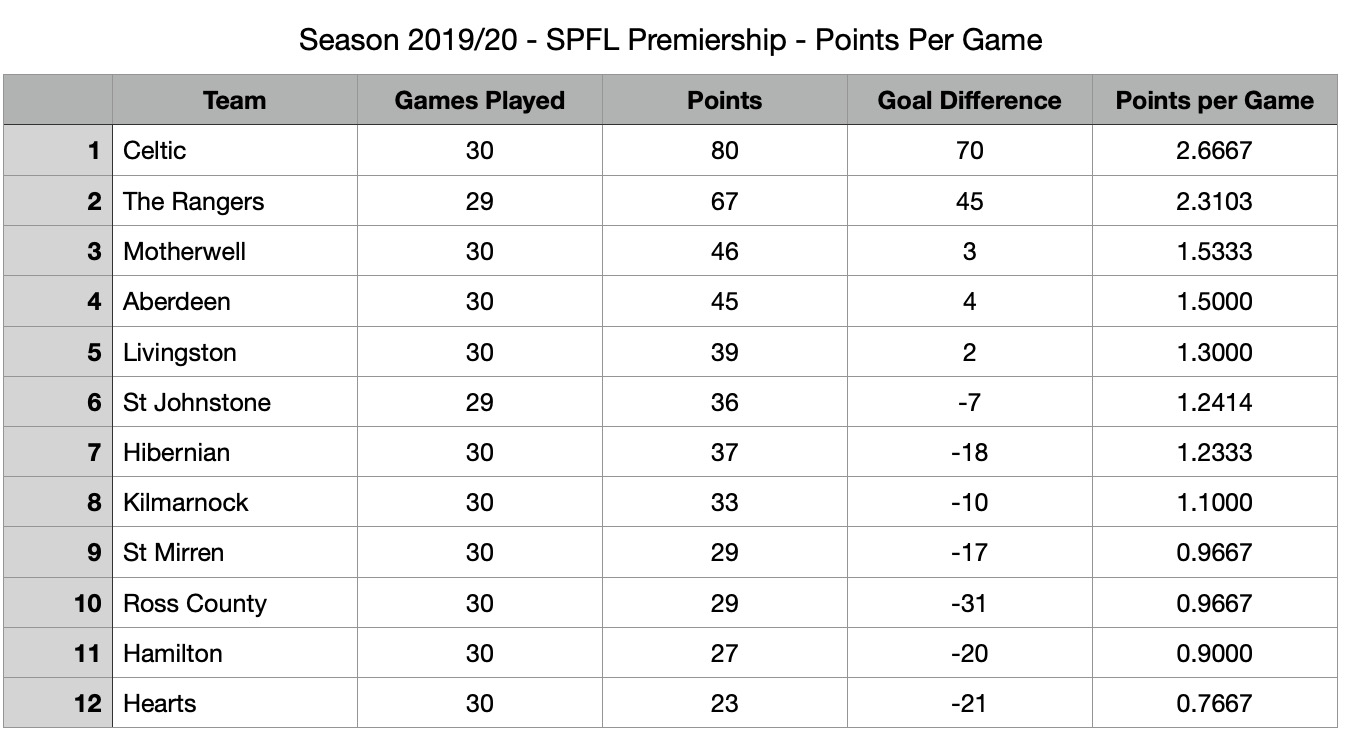 Football has been shutdown in Scotland since 13 March 2020, with the lower leagues already declared over.

This also means that Dundee Utd will be promoted to the Scottish Premiership.

SPFL chairman Murdoch MacLennan said: “Firstly, I would like to take this opportunity to officially congratulate Celtic on their achievement of winning the Ladbrokes Premiership this season, and also to sincerely commiserate with Hearts on their relegation.

“We would all have rather seen the league season played out on pitches, in stadiums and in front of supporters. This is not the way anybody involved with Scottish football would have wanted to conclude the league season but, given the grave and unprecedented circumstances that we are facing, the Board has agreed that it is the only practical way forward.

“Covid-19 has wreaked havoc on sporting competitions around the world and the repercussions will be felt for a long time. Scottish Government restrictions and deep concerns for both player and spectator safety left the SPFL with no realistic option but to call the Ladbrokes Premiership now and we thank the Premiership clubs for their support on this decision.”

SPFL chief executive Neil Doncaster said: “On Friday, Ladbrokes Premiership clubs expressed their clear and unanimous view that there was no realistic prospect of completing the outstanding fixtures from Season 2019/20.  The SPFL Board met this morning and in line with the express agreement of member clubs in April, the Board determined that League Season 2019/20 and the Ladbrokes Premiership be brought to an end.

“This decision now enables us to pay out around £7 million in fees to help clubs stay afloat during this incredibly difficult time. We will begin processing these payments immediately.

“The focus of all those involved in the game will now turn to how we get football up and running again safely as soon as possible.  Next season’s Betfred Cup first round group stage is scheduled to begin in mid-July, with coverage from Premier Sports.  The 2020/21 League Season in all four of our Divisions is due to commence on 1 August, which coincides with the start of our new and exclusive five-year broadcasting deal with Sky Sports.

“Nobody should be under any illusion as to how complicated and difficult a challenge it will be to return Scottish football to normality. We will be liaising with Government on the best way forward and working to ensure that all of our 42 clubs are playing football again as soon as humanly possible.”