A year ago today we lost a good friend, and a best mate… Mark Walker.

In the immediate aftermath of his sudden loss, we were supported by so many people with messages from across Scotland and around the world and we couldn’t have got through the past year without the support from our Dons family – you were there for us when we needed you most and we can only thank you from the bottom of our hearts for that.

It hasn’t been easy, and every so often when at matches or travelling on the supporters bus, we’ve asked what Mark would have said or done – but to do that shows just what lasting memories he has had on all of us, and the larger than life figure that he was.

As “King” Joey Harper said “When I am driving to the games now I will be looking at the sky for a cloud that looks like a bus and when I see it I will know that Mark is on his way to see the Dons.”

Whilst the immediate buses after his death had a sense of loss – our members have pulled together to continue the laughter and fun – but always knowing Mark is there, watching down us, as we follow the Dons.

Our chairman, Ken Kerr reflected on his personal memories of Mark and our favourite Mark tales at his funeral last year which we’ve re-produced below – it gives you a true taste of what a character Mark was.

“I’d have hoped that undertaking this task, under these circumstances, would have been something that occurred some thirty or forty years in the future, but fate has intervened and we find ourselves here today.  While we’re here to collectively grieve for Mark, I think it’s very important that we also celebrate his life.  Because Mark was certainly a larger than life character.

People are often described as unique but I think everyone who ever came into contact with Mark would confirm that they’ve never met anyone quite like him.

On first meeting, Mark was a quiet, almost shy person, until he felt comfortable in your company.  Once this threshold was met, things changed and moved on very quickly.

I first met Mark more that twenty-five years ago when, having moved to Inverness from the North East through my employment, I hunted out local like-minded Aberdeen supporters.  I found the Inverness Reds… and of course Mark.  Having established that I possessed a healthy enough dislike of Rangers to meet his very high standards, Mark and I became friends.

Over the years we’ve travelled to countless Aberdeen games together and I do not think I’ve ever met a man more committed in his love for the club.

The Dons were, quite simply, Mark’s life and, through thick and thin, often thin and thinner, Mark was an absolute stalwart.

Travelling to games in Mark’s company, indeed any time spent in Mark’s company, laughter was never in short supply.  He had a unique world view and his opinion on almost any subject…. politics, current affairs… anything was shaped as to how that issue interacted with or affected his beloved Aberdeen Football Club.

I recall a theological discussion, of sorts, taking place on one supporter’s bus which concluded with Mark saying that God did not exist, because if he did he would never allow Aberdeen to lose.

Mark’s focus on following Aberdeen on match days could be best described as intense.  If anyone turned up late for the bus, not even late, just less than ten minutes early, Mark was not happy.  He’d pace up and down growing ever more agitated until everyone was present and correct.  The slagging of any latecomers would begin to abate at about Forres but were the Dons to lose the match, the latecomer would be held responsible for jinxing the day.

Any hold up at a red light or at a junction was heralded as “bigotry” (apparently the traffic system was controlled by some mysterious old firm cabal and on match days they conspired to delay us as much as possible).

But time-keeping leeway was always granted when timings were disrupted by Mark’s notoriously weak bladder.

Trips to games invariably included consumption of quantities of beer and this led to Mark being the instigator of countless lay-by stops on our travels and, on one such stop, Mark’s ingenuity and resourcefulness came to the fore.  We’d stopped at a lay-by, somewhere near Nairn as I recall when Mark spotted that the field by which events were taking their natural course was populated by some fine looking turnips.

Mark decided this was an ideal opportunity for sourcing fresh vegetables.  Nimbly jumping the fence, Mark, rather than grabbing the first neep that came to hand, had a hunt for the one that most took his fancy, covering a few dreels before using his muscle to extract the swede of his choice from the earth, a not undemanding task.  And having completed his harvest Mark raced back to the bus carrying his bounty with a massive grin on his face.

This grinning face was a staple of all journey’s to Dons’ games, very often riotous affairs in Mark’s company.

His ingenuity showed itself in different ways on these journeys.

As you may be aware, alcohol is, technically, banned on buses heading to watch football matches, a constant bugbear of Mark’s and a subject that on one occasion led to a heated debate between Mark and a police officer on the merits of that particular law, following a spot check by Northern Constabulary.

Some bus drivers down the years attempted to enforce this law, a big ask when confronted with the Inverness Reds… and Mark in particular.

One bus driver must have wondered at Mark’s love of Pringles crisps as he boarded the bus with numerous tubes of the snack, all carried in his lucky cat bag.  It turned out Mark has been collecting empty tubes in order to use them to smuggle cans of beer onto the bus.

For a spell, Mark was secretary of the club and it’s fair to say he did not enjoy the administrative side of things very much.  He had a poor memory for names until he got to know you.  This had humorous consequences on an occasion when we had two members called Scott.  Scott Gibb initially . then Scot Laws joined the club.  At first Mark had trouble remembering the second Scot’s surname, so when listing the names of those travelling on the bus it was not uncommon to see the names “Scott Gibb” and “Scot not Gibb” as two of the travellers.

These journeys also revealed Mark’s amazing recollection for all things statistical relating to Aberdeen Football Club. For a spell while travelling, we undertook a quiz to while away some time.  Mark was not usually a high scorer in the quiz unless the questions related to Aberdeen FC.  He was unsurpassed in his knowledge relating to pretty much all aspects of the Dons.  As a tie-break question in the quiz, the crowd size at a random Aberdeen game many years before was to be guessed at by the participants.  In these tie-break questions I do not recall Mark ever being more than a handful out, it was quite uncanny.

But these quizzes often gave another insight into Mark’s unique worldview that I mentioned earlier.  A question that was asked once was “Where is the only place in the United Kingdom that the Queen is not allowed to enter?”  The answer is the House of Commons, so, sadly, Mark’s answer of “my house”, did not gain him any points.

But if the journeys to the games were fun filled affairs, actually watching a match in Mark’s company could be a stressful experience.  Mark was a very nervous spectator, always convinced that disaster was just round the corner for the Dons and to be fair it very often was.  Even with a 3 or 4 goal lead in the last ten minutes the game was never won in Mark’s eyes.  If I had a pound for every time Mark asked me how long to go, often in the early stages of the first half, I would be a very wealthy man.

It’s fair to say Mark lived his life by the mantra “work hard, play hard”.  Mark certainly worked hard in a physically demanding job on many and varied building sites and building projects throughout the North.  And by all accounts there was also plenty of laughter around these environs in Mark’s company.

At work Mark’s devotion to Aberdeen made him the target for a number of wind-ups by various colleagues over the years.  On one such occasions a picture of a Rangers player was pinned to the back of Mark’s hi-viz vest without him noticing.  Mark wandered around for a good chunk of the day blissfully unaware of this.  Late in the day when Mark discovered he’d been pranked in this fashion he was not best pleased and proceeded to ritually burn the offending item of workwear.

When not following the Dons, Mark was also a keen follower of the Beauly shinty team.  The annual New Year Lovat Cup derby was a favourite day in Mark’s calendar.  He was also a keen fisherman and on our travels every time a fisherman was spotted it led to the now familiar cry from Mark of “fish on”.  A keen swimmer and water polo player, Mark would often arrive for a match with tales of the huge distances he’d just swam that morning.

One thing though, that typified all of Mark’s downtime pursuits was the social aspect that came to be attached to them.  A couple of beers and some right good banter and Mark was in his elements and that will be my primary memory of travelling to watch Aberdeen in Mark’s company.

I think it was fitting that in the tribute in the match programme at the recent Aberdeen v Hamilton game there was a picture of Mark with his very first Aberdeen hero “King” Joey Harper.

So, how do you sum Mark up?

Well, Mark was often given to outbursts of intense dislike for opposition football teams, particularly Rangers, opposition players, opposition fans…. James Corden, but that was really all just bluster. as anyone who got to know him will tell you, there was not a bad bone in his body.

He was a man of simple tastes, he took pleasure in simple things, he knew what he liked, he new what he didn’t like, he lived life in his own way, on his own terms, he was contented most of the time and he was comfortable in his own skin.  And I think if more of us lived our lives in this manner the world would be a far happier place.

So, Mark, my friend, I’ll see you further on up the road, but, for now, sleep easy pal, we’ll all miss you. 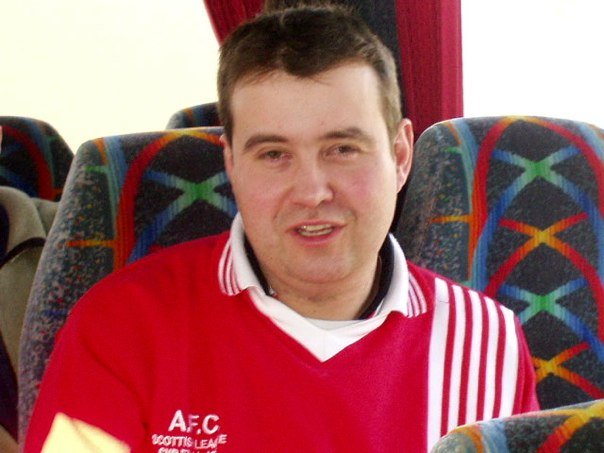 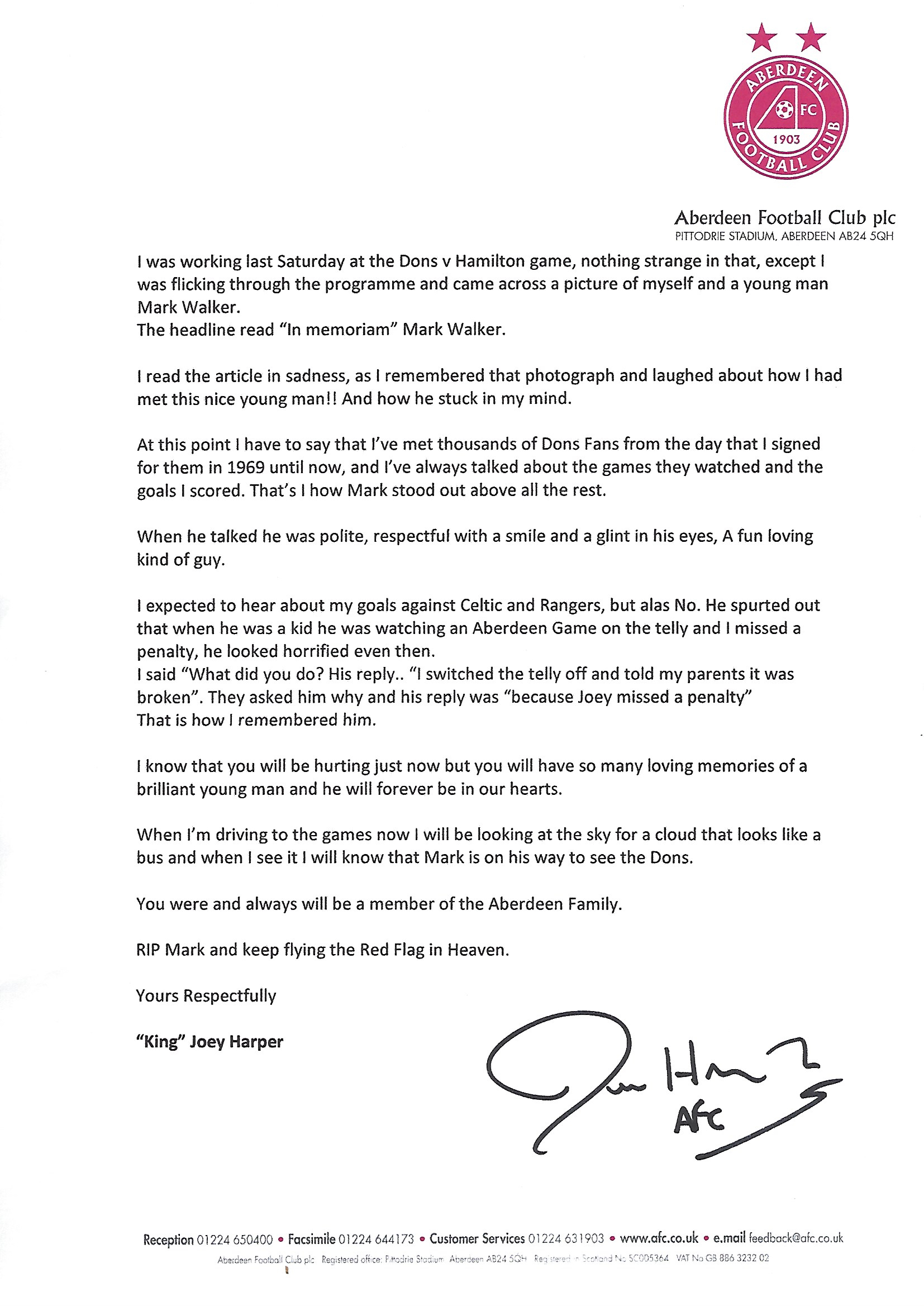