The channel is available across the UK, but will mean some changes to how you find the channel, BBC Two and BBC Four, to viewers in Scotland.

For Viewers in Scotland

BBC Two Scotland channel ceased broadcasting at midnight on 17 February 2019, from this point onwards it will show programming from the main network version of BBC Two as seen in England.

On Freeview and Youview, BBC Four (standard definition) has moved in Scotland from channel 9 to channel 82. You may need to retune your Freeview / Youview receiver to get the channel.

On Virgin Media, BBC Scotland HD is available on channel 108 in Scotland.

Meanwhile, on Sky, BBC Scotland HD is on channel 115.  Freesat viewers in Scotland will see the channel on 106.

For Viewers outside Scotland

The new BBC Scotland TV channel won’t be broadcast on Freeview or Youview outside Scotland, however viewers with connected devices will be able to stream the channel via the BBC iPlayer.

On Virgin Media, BBC Scotland will be available on channel 162 outside of Scotland, taking a slot currently used to duplicate BBC Two.

On Sky, viewers in England, Wales and Northern Ireland will see the channel on 457.

On Freesat, viewers outside of Scotland will access BBC Scotland on channel 108.  HD receivers will store the standard definition version of the channel on 174. 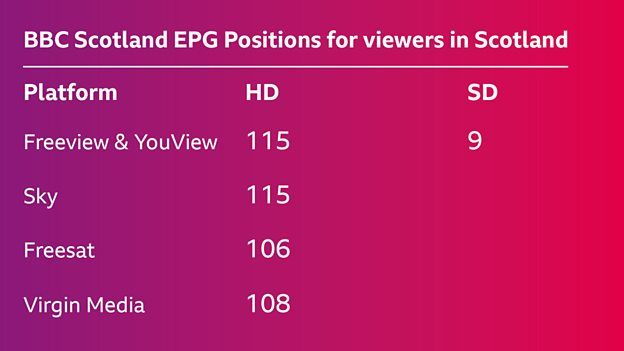 Eight Scottish Championship sides will feature in the first batch of matches to be broadcast live on Friday nights on the new BBC Scotland channel.

Matches will kick off at 7.05pm and the channel will broadcast up to 20 live Championship matches over the next two seasons.

The initial matches announced are: