After the SPFL voting fiasco over the past week, Dundee have now submitted a ‘yes’ vote to the SPFL’s proposals which means Dundee Utd, Raith Rovers and Cove Rangers are crowned champions of their respective leagues.

The decision also seals the relegation of Partick Thistle and Stranraer.

Celtic could be crowned champions of the Premiership and Hearts fall out of the top flight if the SPFL deem it impossible to play the outstanding matches – that could be announced after the UEFA meeting due to take place on 23 April 2020.

Dundee have told the SPFL of their decision this afternoon and the SPFL have confirmed the vote in favour.

However, don’t expect that to be the end of the story.

Partick Thistle advised yesterday that their legal advice says that Dundee’s retracted ‘no’ vote “must stand”.

Thistle claim the SPFL failed to “provide sufficient information” for clubs to make an informed vote.

They also noted that the SPFL “could be in breach of duty” because the resolution stated the only way to release funds to clubs was by declaring the season over.

“However, as it now transpires, there was a vehicle to release monies in the shape of loans, quite apart from the possibility of changes being made to the SPFL articles to allow the payments normally made at the end of the season to be made now,” Thistle added.

“We would urge the SPFL to move immediately to approve loans to clubs against the monies owed to them at the season end, based on their current position in the league.”

The SPFL have announced that the end of the lower league season immediately, and gives them power to do so with the Scottish Premiership should the SPFL deem it impossible to play the outstanding matches. 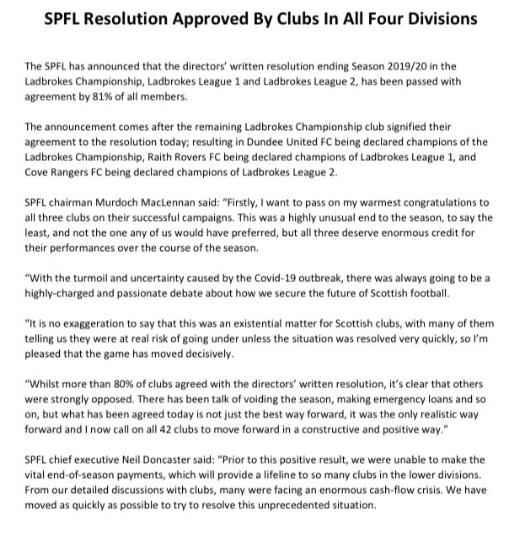 Partick Thistle say they will not take legal action against the SPFL’s resolution to end the lower-league seasons in Scotland, despite believing they have the option to do so.

Thistle have been relegated from the Championship after Dundee’s change to a ‘yes’ vote passed the plans.

The Glasgow club were two points adrift at the bottom, but had a game in hand over Queen of the South in ninth.

“We can’t be responsible for pushing even one club to the brink,” they said.

“If we were to take this action to court, there is a risk that might stop the release of much-needed monies to those clubs on Friday. That’s a step too far for us.”

Thistle had sought a legal opinion from a QC on the league’s plans which said there were a number of grounds for challenge, one of which was that Dundee’s original ‘no’ vote should have stood.

They say they have taken further advice which gives them “the option to take this before a court” because of “significant issues” surrounding the vote.

But given the cost of a legal challenge, Thistle believe the money could be put towards ensuring the club stays in business during the coronavirus shutdown.

“To pursue court action costs money and considerable time – so we have had to consider carefully whether both could be better spent on securing the club’s future and protecting the livelihoods of those we employ,” a club statement added.

“In deciding what our next steps should be, that was our first priority.

“It would be hypocritical of us to have espoused ‘do no harm’ as a reason why we shouldn’t be relegated and then do exactly that.”

Thistle say they will make “a positive contribution to the discussions on possible changes to the league structures”.

The club added: “We aren’t looking for sympathy, we don’t need it. We are a well-run, debt-free club with a proud history of rolling with the punches.

“We may be down but we are not out. When football returns, we will be here, ready to play, regardless of the league we are in.”

Scottish Football Won’t Return Until August At The Earliest