Dave Cormack has National Clinical Director, Professor Jason Leitch and the Scottish Government in his sights following their rejection of the proposals put forward by Aberdeen for the return of fans to Pittodrie over Christmas and New Year.

A clearly frustrated Cormack, published a letter to the Scottish Government on the club website which states:

Thank you for your reply confirming that our latest applications are not being considered. Frankly, it does not answer the key question we’ve been asking for months about why the Scottish Government chooses to deny Scottish football fans access to stadia, while allowing the public into other less regulated events at Level 2, contrary to what Jason Leitch told us months ago.

We fully appreciate that public health is the Scottish Government’s top priority and that Ministers are taking a cautious approach. However, we want to be perfectly clear that our applications for allowing 1,000 fans in December, and if successful, increasing to 2,000 in late December/early January were contingent on being in either Level 1 or 2 and not Levels 3 or 4.

Let me stress that Aberdeen Football Club is simply looking for an answer to the fairness question and to work together to create a clear scenario plan for football’s return. We all know any plan allows for dates to change. Right now the “plan” is test events with 300 fans in Level 1. That’s it. Why on earth can the government not sit down and collaborate with us, at decision-maker level, on a progression plan?

The other reason we continue to push this is to give a bit of relief, joy and hope to fans, many of whom live for football and who are consequently suffering from isolation, loneliness, anxiety, depression and other mental health issues. Yes, it costs to put on these test games with limited crowds, but it’s well worth it for our fans.

We attach a table which we’ve completed with information from the current guidance on the Scottish Government’s website and had validated by Aberdeen City Council’s Environment Health Officer. This clearly shows that in Level 2, our stadium would be subject to more stringent controls than other venues, such as supermarkets, shopping centres, restaurants and cinemas – all of which are open at this time. Indeed, we would protect our fans through staggered entry and arrival times, temperature checks, strictly enforced 2 metre social distancing, one-way systems and codes of conduct, all of which would be fully stewarded. More importantly, we have a reliable test and protect capability. All of this is supported by an eminent Scottish epidemiologist.

This table patently shows that fans in stadia would be safer than in other venues which is why we are struggling to understand what is behind the decision to reject our bid and why Ministers are not considering increasing the numbers of fans permitted into stadia, even in Level 1. Based on this evidence, there are no scientific or clinical reasons why fans continue to be locked out of stadia at Level 2. The only conclusion is that football and its fans are being treated unfairly and we’d like to know why this is the case.

Clubs, like ours, who have invested considerable financial and people resources in robust operational plans and protocols and in running successful test events deserve an explanation, especially after being encouraged to make this investment by Jason Leitch who told the SPFL and Premiership Clubs that crowds, socially distanced, in stadia was far more palatable than indoor events. The purpose of running test events with 300 fans now seems pointless if there is no progression plans in place, even in Level 1. Aberdeen Football Club has so far invested around £30,000 in resources to produce its highly regulated environment for limited crowds, after being encouraged to do so by the government through Jason Leitch.

We have repeatedly asked for clarification and meetings with Jason Leitch and also Ministers, yet our requests continue to be ignored. Surely, clubs and our fans are due an explanation as to why they’ve done a U-turn?

Our fear is that any eventual funding package, although welcome, will be insufficient to stem the impending financial crisis in Scottish football if we don’t have a roadmap towards the return of fans imminently. In the meantime, we have no choice but to continue to make our case through yourself and other government officials, the media and on our own channels.

Aberdeen Football Club is committed to standing up for our fans, to making sure that their voice is heard. Over 92% of our fans want to return to Pittodrie based on our protocols. We know this because we’ve surveyed them and we’re in regular communication with them. As a result, we know the challenges they are facing. Indeed, we have just launched our Calling Home for Christmas campaign, where our dedicated calls team are making 5,000 welfare phone calls to fans who are at particular risk of social isolation and mental health problems exacerbated by the lack of football and a festive season devoid of any cheer.

This builds on the impact made earlier this year through our #StillStandingFree campaign which was set up to help fans in the wider community throughout the coronavirus crisis. Over the course of 16 weeks our dedicated staff made 15,000+ calls as part of that mass outreach programme to check-in with people during lockdown. As part of the calls this time round, supporters will be not only be directed towards the Thrive mental health app, which we are offering free through our Health & Wellbeing Partner, Health Shield, but also sign-posted to a mental health workshop delivered by Aberdeen FC’s Community Trust in December.

I trust you will convey this message to the decision-makers and that we can expect answers from Jason Leitch and/or Ministers.

In response Cormack said: “It’s now very clear that Scottish football and its fans are being treated unfairly with the rejection correspondence, once again, avoiding answering the key question as to why indoor events in Level 2, with less regulation, are being favoured over the stringent, safe and highly regulated protocols we have in place at our stadium.

“We have compared the criteria in place for a range of other venues, all of which are indoors and open in Level 2, against the stringent controls at our stadium. This stark comparison reveals that fans would be far safer in an outdoor stadium, yet we are still waiting, months later, for the Scottish Government to provide any clinical evidence to support their decision.

“Any independent observer would seriously struggle to understand why the Scottish Government continues to reject our carefully-researched and detailed application.  Despite the devastating financial impact of the lock-out and, encouraged by Jason Leitch, Scottish football clubs have invested considerable resources in robust operational planning to gradually readmit fans safely. At Aberdeen Football Club we’ve spent around £30,000 on putting these in place. There has been a U-turn and neither Jason Leitch nor the Scottish Government will tell us why.

“Jason Leitch himself told the SPFL and Premiership Clubs that outdoor activities were safer than indoor activities yet our successful, safe test events with 300 fans now seem pointless if there is no progression plan in place, even in Level 1. We have repeatedly asked for clarification and meetings with him and Ministers, yet our requests continue to be ignored. Surely, clubs and our fans are due an explanation as to why they’ve done a U-turn.

“Over 90% of our fans surveyed want to return to Pittodrie and 80% of these fans would travel to games with limited numbers by car. We are committed to standing up for our fans and continue to push for their return to football to give them a bit of relief, joy and hope, many of whom live for football and who are consequently suffering from isolation, loneliness, anxiety, depression and other mental health issues. Yes, it costs to put on these games with limited crowds, but it’s well worth it for our fans.

“We’ve got our fans’ backs on this and we’re not going to be fobbed off easily.”

He also provided a comparison of other venues compared to football and the rules in place for these organisations: 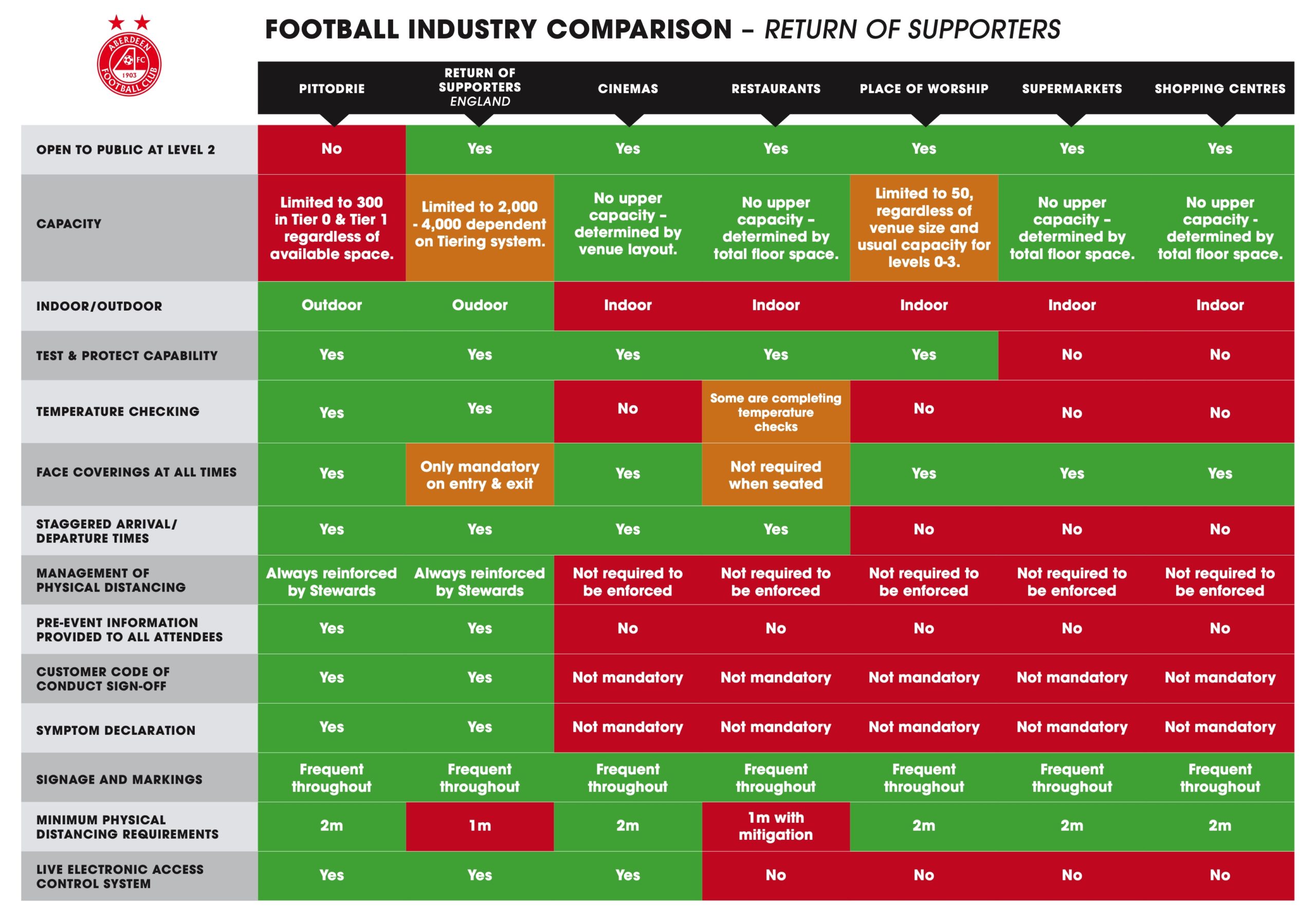 However, a Scottish Government spokesperson said reducing the prevalence of the virus is the “best way to get fans back”.

They added: “We will continue to engage with sporting bodies whose revenue is being impacted. We hope to bring our financial support package to fruition in the near future.”