The impact of the COVID-19 pandemic has increased losses at Aberdeen further as the club announce a £2.9m loss for the financial year ended 30 June 2020 and whilst this doesn’t cover the full period of the COVID-19 restrictions it is clear the club have some difficult decisions to take should the outlook not improve soon.

The impact of fans being locked-out of games since March 2020 will continue to be a pressure on the club until the restrictions are relaxed.  The club are predicting turnover to drop £10m for the current financial year, with an operating loss of £5m with a wages-to-turnover ratio increasing to 90%.

Chairman, Dave Cormack, said: “We were planning for an operating loss of around £2million in the 30 June 2020 accounts due to our strategy of continued investment in a competitive team on the pitch and in fan engagement to increase support in the future. This was with a view to building a long‐term, more sustainable future based on investing in young talent and developing players through our academy to sell on at the right time to balance the books.

“The unforeseen but devastating impact of the coronavirus crisis on the latter part of the 2019/20 season increased that planned loss to £2.9m with projections for the current financial year showing an even more significant loss of £5m due to the effect of COVID‐19 on the full season.”

Without fans returning to Pittodrie this season, the Club faces losing £5m of revenues from match day gate receipts, hospitality, advertising, sponsorship, and retail. A position which, Cormack says, is unsustainable.

“Despite a further £1.1million cash injection from our investors last month and a record player sale, our financial gap, due to the ongoing pandemic crisis, is widening. We are sustaining losses for every home game we play without fans and may be forced to take further, painful measures to ensure the Club’s future.”

Cormack is extremely grateful to loyal fans whose season tickets and AberDNA memberships have helped tide the Club over the summer, along with the staff and players who have taken wage cuts and deferrals. But he admits that the continued loss of income from matchdays is putting even more pressure on the Club’s finances.

He added: “The knock‐on impact of no clear plan for the return of fans to our national sport as we enter the second half of this season will be catastrophic for many Scottish clubs as they look to generate significant cash from season ticket sales for next season, starting in March 2021. At Aberdeen Football Club this could require us being forced to scale back our operations, which would have an impact on the supply chain which depends on our matchday operations.

Working with the Aberdeen FC Community Trust, AFC plays a major role in the socio‐economic fabric of the North‐east, vital work which Cormack warned could also be in jeopardy.

“As a family club, at the heart of our community, we positively touch the lives of so many people of all ages and backgrounds, through programmes around education, health and well‐being. It would be devastating if we had to pull out of these activities to reduce our outgoings. The Trust’s income has been drastically hit by not being able to fund raise at home games or make use of the community facilities at Cormack Park.”

Cormack reiterated that the Club’s strategy throughout the COVID‐19 crisis has been to invest in and deliver an entertaining style of play, to invest in fan engagement that will improve the matchday experience and build the future supporter‐base to achieve consistently higher attendances and income, and to support the wider community by working hand‐in‐hand with the Trust.

He explained: “There may be a perception that Premiership clubs are coping because we recruited new players. The reality is that clubs which fail to invest in the product on the pitch become less competitive, jeopardising vital prize money and undermining revenues due to a drop in support.

“Our dilemma is maintaining our ability to compete and secure at least £2m of prize money each season, while facing a total collapse in income from gate receipts, corporate hospitality and sponsorship on matchdays.

“Investing in players is crucial to ensure a solid succession plan to get ahead of changes to the squad. We’ve achieved that during both the recent transfer windows. We must continue to invest in young talent, including through our academy, with a view to monetising players, like we have done with Scott McKenna.”

The Club has received close to £20m of investment since June 2017, including an injection of over £3m during the pandemic. This investment delivered a debt‐free Cormack Park with about £7m covering losses.

“The only way to do this is by getting fans back into Pittodrie safely, sooner rather than later, so that we can plan for critical matchday income and cash from season ticket sales. We are doing everything asked of us by the Scottish Government and the footballing authorities. We had a very successful test game with 300 fans, where we demonstrated we could easily have accommodated significantly more, safely. Scottish clubs and our footballing authorities must have urgent, constructive and meaningful discussions with government that acknowledge our socio‐economic impact, recognise our plight and deliver a clear plan and roadmap towards a return of fans.” 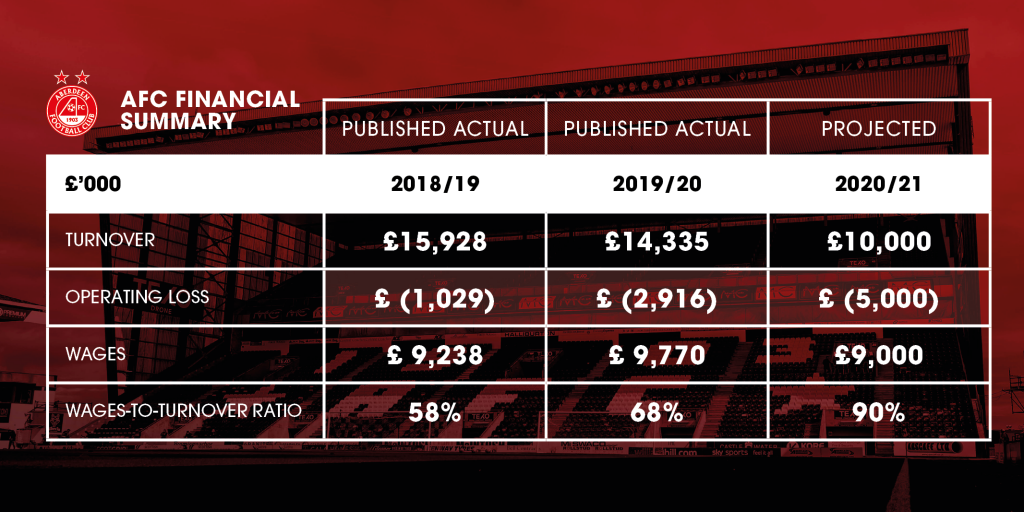